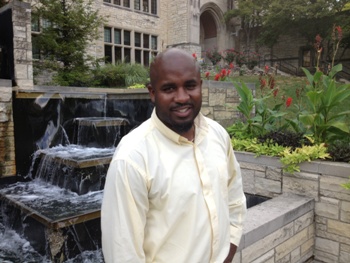 Errick Dixon received his higher education from Central State University of Ohio. After graduating with Degrees in Music Education and Music Performance, he later became a General Music Teacher at Hayward Middle School in Springfield, OH and Glenwood Elementary School in Toledo, OH.  At Springfield South High School, he instructed and helped students to learn and consistently improve their skills as musicians and bandsmen while developing, creating, and executing the Springfield South High School Marching Band program.

Mr. Dixon later became the Band Director at Dunn Middle School in River Rouge, MI where he headed the concert band for periodic performances and gave individual instrumental instruction.   He moved to the city’s High School Band Director’s position at River Rouge High School where the band performed at the East Cleveland Shaw High School and Southfield Michigan High School Battle of the Bands, and the Circle City Classic Parade Competition and placed 1st in all three competitions.  He furthered his experience with his taking of a music director position at Springfield Academy of Excellence in Springfield, OH, where he served his students and the community for 9 years.

During that 9 year period, and as his talent and reputation grew, he was hired as the Assistant Director of Bands for Central State University of Ohio where he composed and arranged music and created field shows, parade, and stand routines for performances.  He was later hired as Interim Director of Bands at the same university where, under his direction, the University Marching Band was voted into the Honda Battle of the Bands; the All-Star version of Black College Bands, to which only the Top 10 Historically Black University Bands in the Country are invited and privileged to participate in annually.

Mr. Dixon comes from a family with a rich history of talented musicians and community leaders.  In the realm of high school and university bands and choirs, he has been a musician, a bandsman, a leader, a motivator, a coordinator, a dance choreographer, and a director spanning almost 40 years and continues the legacy of band, choral, and theatrical excellence to this day.  See Our Executive Director’s Extensive Resume HERE.